Since 1985, OATs have been the State’s preferred source of long‑term financing. They are fungible securities with a maturity at issue of 2 to 50 years. They are usually issued by auction. New issues are generally associated with existing issues. This enables the State to issue new bonds at a price in line with the latest market prices but identical in every other way to the initial issue. As a result, the State avoids issuing too many bonds with different characteristics and ensures the liquidity of those already issued.

On the Friday preceding an auction, AFT announces the bonds to be auctioned on the following Thursday and the upper and lower limits of the total amount to be auctioned. Auctions of long‑term (maturities of 8 years or more) OATs are held on the first Thursday of the month at 10.50am while auctions of medium‑term (maturities of 2-8,5 years) are held on the third Thursday of the month at 10.50am. Bids of at least one million euros are expressed on the basis of price as a percentage of par value net of accrued interest to two decimal places. Since 6 October 2014, OAT auctions have been settled at T+2, i.e. the following Monday. 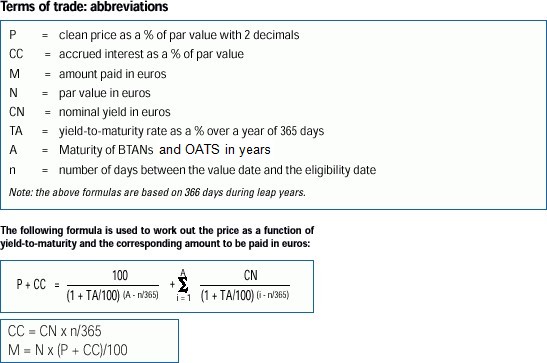