AFT ensured the financial continuity of the French State in 2020, despite the COVID-19 crisis. The day-to-day balance on the State’s single account remained in credit and the transactions made through the account were completed properly. For this purpose, AFT produces successive 12-month cash and debt forecasts

The State’s cash holdings are centralised in a single account with the Banque de France. This account is used to record all of the transactions on nearly 5,000 transaction accounts held by some 3,400 government accountants.

In its capacity as the State’s banker, the Banque de France centralises these transactions in real time.

The transactions posted to the State’s account correspond to: 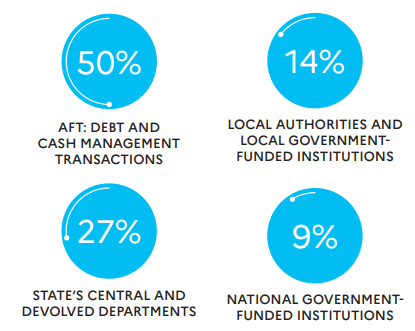 AFT ensures that the State’s cash position is always adequate to settle the financial transactions posted to the Treasury Account under the most secure conditions. For this purpose, AFT monitors the execution of flows into and out of the Treasury Account with the Banque de France in real time. The average daily volume of cash flowing in and out of the account came to €19.6bn in 2020.

Starting in March 2020, cash management was conducted in a very uncertain environment. The forced halt of some economic activity and government support measures had three consequences: higher expenditure, lower revenue and greater recourse to market financing to offset the fiscal deficit (see page 47). AFT had to adjust its forecast of flows in and out of the Treasury Account regularly, in close consultation with its external partners, including the social security and unemployment insurance systems. It participated in framing each new Supplementary Budget Act, since it is AFT’s responsibility to compile the State’s cash flow statement, which balances the sources and applications of funds, and debt service. It is also tasked with translating Parliament’s decisions into cash flows, with the help of the administrations concerned

AFT provides proactive management of the State’s cash resources to ensure sound stewardship of public monies. Temporary cash surpluses may be invested in interbank market transactions, with due consideration of counterparty risk. These transactions take the form of unsecured deposits or repurchase agreements involving government securities. In the early days of the crisis, back in March 2020, demand rose sharply as banking counterparties sought cash. The abundance of cash on the European interbank market following the central bank’s intervention meant that counterparties were less interested in the loans offered by AFT. This loss of interest had repercussions on AFT’s investment activities. The daily amount invested averaged approximately €9bn over the year.

At the same time, AFT gave itself the option of creating a reserve of securities in the Government Debt Fund (CDP) to be used as collateral for accessing cash on the repo market. This responsive and secure facility enjoys a deep market. It supplements the other short-term cash management instruments, which are Treasury bills and cash lines of credit. The increased borrowing requirements in the second quarter of 2020 demonstrated the importance of diversified funding sources for the State. Repos, or repurchase agreements, are transactions by which cash is borrowed in exchange for an equivalent amount of securities provided as collateral. The lender has the option of reselling the securities received as collateral, and the securities can also be used as collateral for central bank refinancing. This facility gives AFT the same tools as other government debt agencies, such as the British Treasury or the German Finance Agency.

Entities that are required1 or authorised to deposit their cash holdings on the Treasury Account are called Treasury correspondents. Their deposits on 31 December 2020, excluding “Invest for the Future” accounts, amounted to €156bn. Transactions made on Treasury correspondents’ accounts have a direct impact on the Treasury Account. AFT oversees daily reporting of advance notifications of cash transactions from Treasury correspondents, which enables it to determine the settlement dates and amounts of transaction flows posted to the Treasury Account as accurately as possible. More specifically, local authorities and governmentfunded institutions are required to notify AFT of any financial transaction amounting to more than €1m by 4pm on the previous day. In 2020, the percentage of such transactions notified in advance stood at 98.5% for local authorities and government-funded institutions. These results are slightly better than the performance target set out in the Budget Act.

During the 2020 crisis, the government extended the obligation to deposit funds on the Treasury Account to include some entities that had previously been exempted for historical reasons. Order 2020-1496 and Implementing Decree 2021-29 effective since the 1st October 2021 have made it possible to pool the funds of new public and private entities providing public services in the Treasury Account, thereby reducing the need to raise market financing.

1 Under the terms of the decree on government budget and accounting management of 7 November 2012, most public sector entities are required to deposit their funds with the Treasury. This requirement applies in particular to local authori¬ties, government-funded institutions and hospitals. The Decree came into force on 30 June 2014.