On Tuesday 20 March 2018, at a ceremony in London, Climate Bonds Initiative announced the winners of an award that honours, for the third consecutive year, the most influential players in the development of the green bond market.
The initial issue of the Green OAT 1.75% 25 June 2039 won several awards, including one for the largest issue of a sovereign green benchmark bond in 2017. 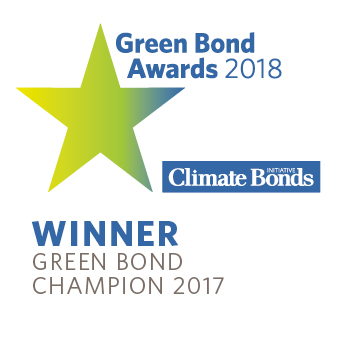 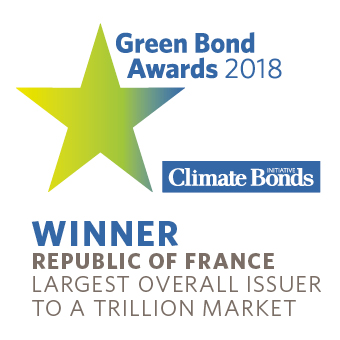 Background to the Green OAT

On 24 January 2017, Agence France Trésor launched the first sovereign green bond with a maturity of 22 years. The Green OAT 1.75% 25 June 2039 issuance amount was €7bn, making it the largest and longest-dated green benchmark bond ever issued. By becoming the first country in the world to issue a sovereign green benchmark bond, France confirmed its role as a driving force for the implementation of the goals of the December 2015 Paris Climate Agreement.

As it does for the other OATs, and similar to what it had done on two occasions in June and December 2017, AFT intends to tap its green bond – whose outstanding amount currently stands at €9.7bn – to meet market demand and within the limit of the amount of eligible green expenditure, which comes to €8bn for 2018.

France is also looking to bolster market standards by making unprecedented transparency commitments with the publication of three reports for investors on the use of proceeds, the performance of eligible green expenditure and the ex-post environmental impact of funded projects and expenditure. A Green Bond Evaluation Council made up of independent scientists and economists of international repute is tasked with evaluating the environmental performance of the eligible green expenditure funded by the proceeds of green bond issues.

The success of the Green OAT has already been highlighted by several awards from market professionals: three in September 2017 from Euromoney/GlobalCapital[1] and three in December 2017 from the International Financing Review (IFR)[2].