1. This morning, the Cabinet adopted the French Budget Bill for 2019. The total financing requirement will stand at €227.6bn, mainly consisting of €98.7bn to cover the deficit to be financed and €130.2bn to redeem medium- and long-term debt maturing in 2019.

2. The financing requirement in 2019 will be met by (i) the medium- and long-term government debt issuance programme, net of buybacks, worth €195bn; (ii) resources from the active management of government shareholdings and earmarked for debt reduction for €2bn; (iii) an increase in outstanding short-term government securities (BTFs) for €15bn; (iv) an increase in correspondents’ deposits for €11bn, largely due to contributions to the Innovation Fund; (v) a contribution from cash available in the Treasury’s account of €1.1bn; and lastly (vi) other cash sources of €3.5bn, assuming issue premiums net of discounts worth €3bn.

4. The detailed medium- and long-term financing programme for 2019 will be released in December.

7. Other cash resources, including the recording of net treasury premiums, have been revised upwards to €7.8bn in 2018, compared to €3.5bn expected in the initial Budget Act. The favourable low interest rate context has resulted in the recording of further net treasury premiums in 2018. These premiums, while at a higher level than expected in the initial Budget Act, are still lower than over the period 2015-2017, due to the anchoring of interest rates at a low level and the gradual rolling over of benchmark securities with coupons in line with market rates.

8. The outstanding short-term government securities (BTFs) is reduced by €7.9bn.

10. State debt service is expected to stand at €41.7bn, versus the figure of €41.2bn in the initial Budget Act, owing to an upward revision in interest payments on securities indexed to French and European inflation. 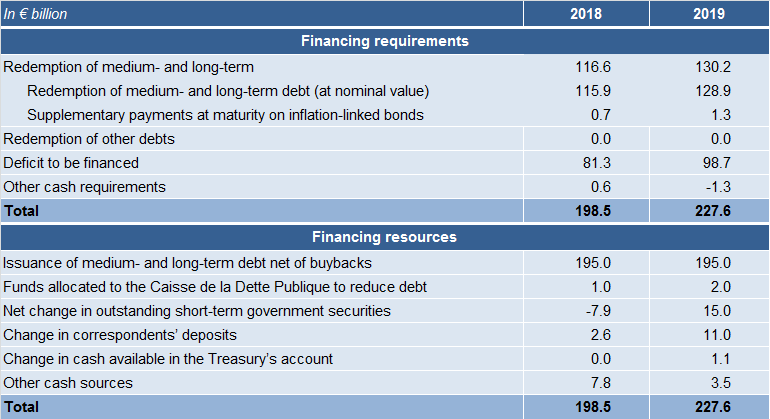