François Baroin, Minister of the Economy, Finances and Industry, has approved the indicative financing programme of the French Republic for 2012.

This funding requirement will be covered by medium- and long-term borrowing (BTAN & OAT) up to €178bn net of buybacks, and the cancellation by the Caisse de la Dette Publique of €4bn of securities. The short-term bills outstanding (BTF) will be decreased by €4.2bn.

The funding programme implements the 2012 Budget Law which sets a €80.1bn ceiling to the year-on-year increase of the long- and medium-term negotiable debt.

French CPI and Eurozone HICP index-linked bonds will account for around 10% of medium- and long-term debt issuances. As in previous years, AFT will adjust issuances to match demand and to ensure the liquidity of the bonds. 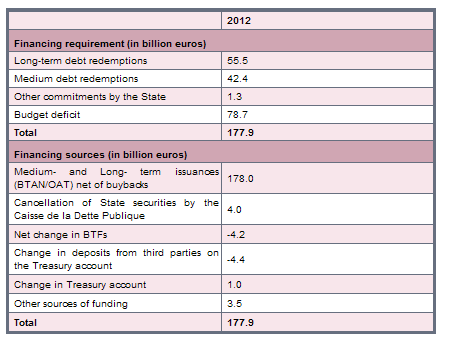 Net issuances of medium- and long-term securities will amount to €178bn. As in the past, AFT will be allowed to operate debt buybacks and/or switches, depending on market conditions and financing needs.

Net issuances will include around 10% of inflation-linked bonds, the remaining issuances being distributed between BTANs and OATs. As in previous years, AFT will adjust issuances to match demand and to ensure the liquidity of the bonds.

AFT will issue one new 2-year benchmark, two new 5-year benchmarks and two new 10-year benchmarks. AFT will examine, in close cooperation with SVTs, the issuance of other new long-term benchmarks on the 15-year and the 30-year maturities, if the demand on theses parts of the curve in 2012 justifies the introduction of new references.

AFT will examine the possibility to issue an OAT TEC 10, (variable-rate OAT indexed on an average yield of OAT with a constant maturity o f 10 years, the TEC 10) depending of investors demand and market conditions.

As regards the lines to be auctioned, AFT retains, as in previous years, the capacity to adjust to final demand as reported by the SVTs and tap non-benchmark lines or tap, at BTAN auctions, OATs with a less-than-5-year remaining maturity.

Index-linked bond auctions will take place every third Thursday of the month, at 11:50 am (Paris time), except in August and December.

Regarding BTFs, AFT announces that the date of communication to the market of BTFs securities which will be auctioned is now settled every Friday at 11.00 am.

In order to increase its flexibility to meet the demand observed during the auction, AFT will now communicate the amounts to auction BTFs with a tightened volume range on each of the bills proposed at auction, and not as it is in the current system with a fixed amount per line auctioned.