In keeping with the transparency commitments made when the OAT 1.75% 25 June 2039 was launched, Agence France Trésor has published the second allocation and performance report on the expenditure matched to the Green OAT in 2018.

This report presents all of the expenditure and investments matched to Green OAT issuance in 2018, along with the related performance indicators.

The Chief Executive of Agence France Trésor, Anthony Requin, took this occasion to state that “the publication of this second report underscores France's specific commitments that it made during the inaugural issuance. This has contributed to the success of the Green OAT, whose outstanding amount now stands at €19bn.”

To download the full text of the 2018 Green OAT allocation and performance report, click on the picture below (only available in French, soon available in English) 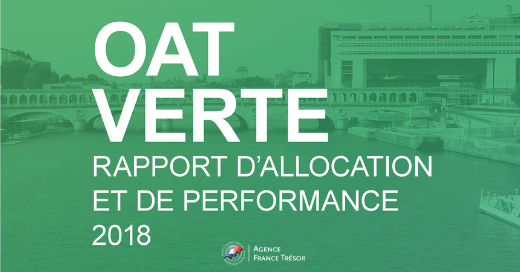 On 24 January 2017, Agence France Trésor launched the first sovereign green bond with a maturity of 22 years. The Green OAT 1.75% 25 June 2039 issuance amount was €7bn. By becoming the first country in the world to issue a sovereign green benchmark bond, France confirmed its role as a driving force for the implementation of the goals of the December 2015 Paris Climate Agreement. After several tap issues, the outstanding amount of the Green OAT now stands at €19bn.

When the Green OAT was first issued in January 2017, the French government also made other reporting commitments, over and beyond the expenditure allocation and performance report whose 2018 edition has been posted today. The government will also report on the ex post environmental impact of green expenditure matched to green bond issuance, under the supervision of the “Green Bond Evaluation Council.” The Council, which is made up of independent scientists and economists of international repute, was inaugurated on 11 December 2017. The first edition of the report was published in November 2018, and focused on the Energy Transition Tax Credit. The Council’s most recent meeting was held in early June 2019 and a second impact assessment report devoted to the Green OAT financings allocated to Voies Navigables de France (the French waterway network) will be published in late 2019.