20 July 2021: Release of the 2020 Green OAT allocation and performance report

In keeping with the commitments made when the OAT 1.75% 25 June 2039 was launched, Agence France Trésor is publishing the fourth allocation and performance report on the green OAT, covering the funds raised in 2020, i.e. an amount of EUR 6.7 billion. This report presents all the expenditure matched to the Green OAT issuance in 2020, along with the related performance indicators.

The Chief Executive Officer of Agence France Trésor, Anthony Requin, took this occasion to emphasise that “as France launched a second green OAT in March 2021, the OAT 0.5% 25 June 2044, the publication of this allocation report provides an opportunity to review in detail the green bond issues of 2020 and the associated green expenditures. By continuing to issue green debt at a sustained pace, in response to investor demand, we continue to stand at the forefront of energy transition policies. Last autumn, France drew up the first green budget among OECD countries; compliance with the transparency commitments linked to green OAT issues, which this new report illustrates, is part of a similar approach: it is a matter of putting into perspective, for the use of citizens, civil society and investors, the efforts made by the State in order to enhance the ecological transition.” The total amount of green debt issued by France, thanks to its two green OATs (the OAT 2039 and the OAT 2044), is currently 38.2 billion euros.

Download the full 2020 Green OAT allocation and performance report by clicking on the cover picture: 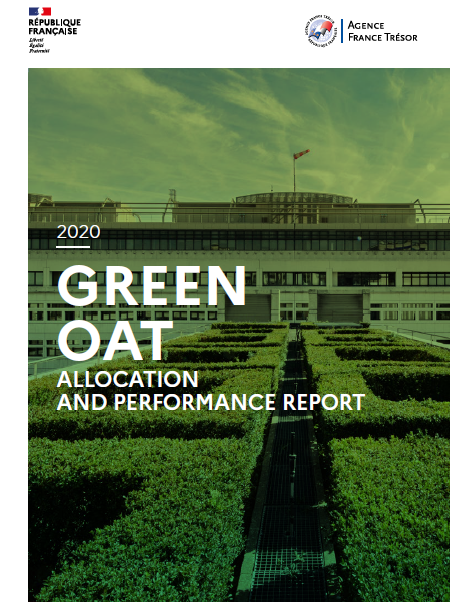 On 24 January 2017, AFT launched the first green sovereign bond with a benchmark size (initially 7 billion euros), the OAT 2039. In doing so, it confirmed France's leading role in meeting the ambitions set out in the Paris Climate Agreement of December 2015. In addition, on 16 March 2021, AFT launched a second green bond, through syndication, OAT 2044, governed by the same framework document as the first. These two securities have been retaped since their inaugural issue and now have outstandings of €28.9 billion and €9.3 billion respectively, for a total of €38.2 billion

At the same time, AFT is today posting an update of its second opinion review on the green nature of eligible expenditure associated with green OAT issues for 2020.

At the time of the inaugural issue of the green OAT in January 2017, France also undertook, in addition to the annual report on the allocation of expenditure and its performance, the 2020 edition of which was put online today, to study the environmental impacts of the expenditure associated with the green bond issues. This assessment work, overseen by an internationally recognised board of independent experts, results in specific reports. The first three reports, on the Energy Transition Tax Credit, Voies Navigables de France and the Office National des Forêts, were published in 2018, 2019 and 2020 respectively. The fourth report, to be published by the end of 2021, will focus on certain aspects of the innovation strategy of the Future Investment Programme.