1. This morning, the Council of Ministers adopted the French Budget Bill for 2020. The total financing requirement will stand at €230.5bn, mainly consisting of €93.1bn to cover the deficit to be financed and €136.4bn to redeem medium- and long-term debt maturing in 2020. Absorbing a part of SNCF Réseau debt will also increase the government's 2020 debt redemptions by 1.8bn.

2. The financing requirement in 2020 will be met by (i) the medium- and long-term government debt issuance programme, net of buybacks, worth €205bn; (ii) resources from the active management of government shareholdings and earmarked for debt reduction for €2bn; (iii) the increase in outstanding short-term government securities for €10bn; (iv) an increase in correspondents’ deposits for €6.4bn, particularly due to contributions to the Innovation Fund; (v) a contribution from cash available in the Treasury’s account of €3.6bn; and lastly (vi) other cash sources of €3.5bn, assuming issue premiums net of discounts worth €3bn.

3.State debt service is expected to stand at €38.6bn, including €0.4bn in interest charges connected with the partial absorption of SNCF Réseau debt.

4. The net year-on-year increase in the nominal value of negotiable State debt with maturities of one year or more will be capped at €74.5bn.

5. The detailed medium- and long-term financing programme for 2020 will be released in December 2019.

6. Since the beginning of 2019, France has benefited from historically low financing terms, against the backdrop of unprecedented low terms for the sovereign debts in the Euro area. The weighted average yield on medium- and long-term debt securities stood at 0.17% for the first three quarters of the year, compared to 0.53% in 2018 and an average of 2.17% from 2009 to 2014.

8. Other cash resources, including the recording of net treasury premiums, have been revised upwards to €12.5bn, compared to €3.5bn expected in the 2019 initial Budget Act. The favourable low interest rates resulted in the recording of further net treasury premiums in 2019. These premiums are at a higher level than expected in the initial Budget Act, due to the anchoring of interest rates at a very low or negative level and the gradual rolling over of benchmark securities with coupons in line with market rates.

9. Outstanding short-term government securities will increase by €4bn, compared with a rise of €15bn expected in the 2019 initial Budget Act, whilst remaining at a historical low level due to the recycling of significant net treasury premiums into a lower level of short-term securities issuance.

11. State debt service is expected to stand at €40.4bn, versus €42.1bn in the initial Budget Act, owing to the continuing extremely low level of short-term interest rates over the past year and to a downward revision in interest payments on securities indexed to inflation. 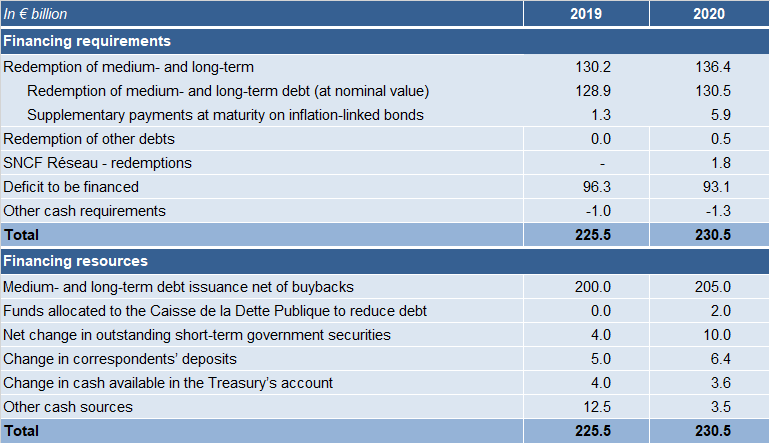