Pierre Moscovici, Minister for the Economy and Finance, has approved the indicative financing programme of the French Republic for 2013.

This funding requirement will be covered by medium- and long-term borrowing (BTAN & OAT) of €169bn net of buybacks, and the cancellation by the Caisse de la Dette Publique of €4bn of securities. The short-term bills outstanding (BTF) will decrease by €0.3bn.

The funding programme implements the 2013 Budget Law which sets a €62.1bn ceiling to the year-on-year increase of the medium- and long-term negotiable debt.

As in previous years, AFT will adjust issuances to match demand and to ensure the liquidity of the bonds. French CPI and Eurozone HICP index-linked bonds will account for around 10% of medium- and long-term debt issuances. 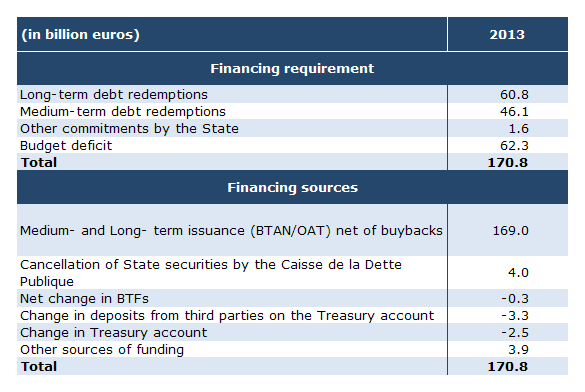 AFT will issue one new 2-year benchmark, two new 5-year benchmarks and two new 10-year benchmarks. AFT will examine, in close cooperation with SVTs, the issuance of other new long-term benchmarks, in particular on the 30-year maturity, if the demand justifies the introduction of new references.

Regarding inflation-linked lines, AFT will examine the opportunity to issue new bonds; the launch of a new 10-year benchmark on the European inflation (OAT€i) will be examined. In addition, AFT will continue to issue existing linkers, in order to meet investors demand.

From January 1, 2013, as for all countries of the euro area, the new bonds issued by the State shall be accompanied by collective action clauses (CACs), in accordance with Article 12 of the Treaty establishing the European Stability Mechanism.

As decided at the European level, the liquidity of existing bonds will be provided by the possibility to tap securities without CACs, in the limit of a maximum of 45% of total issuances.

3. Change in the name of the medium term securities and months of repayment

New benchmark securities created on medium-term (maturities of 2 and 5 years) will be now issued under the form of OAT (Obligation Assimilable du Trésor), as it is the case for long-term securities (10 years and more). The specific name of BTAN (Bon du Trésor à intérêts Annuels) for medium-term securities has indeed no more the utility it had originally. Existing BTAN will continue to be tapped in order to maintain their liquidity.

Furthermore, repayment dates of new nominal OATs created, with maturity of 2 years and more, will be set to May or November, instead of the current dates. For linkers, repayment date remains July. Therefore, it will be easier to strip and reconstitute newly issued securities with CACs.

As regards the lines to be auctioned, AFT retains, as in previous years, the capacity to adjust to final demand as estimated by the SVTs by tapping non-benchmark lines or tapping existing BTANs at OAT auctions with a maturity of 2 years to 5 years.

Inflation-linked bond auctions will take place every third Thursday of the month, at 11:50 am (Paris time), except in August and December.