The 2013 French budget bill was adopted this morning by the Government. The net issuance of medium-and long-term securities (OAT, BTAN) will amount to €170 billion in 2013. The total financing requirement for the State will amount to €171.1 billion, out of which €61.6 billion result from the projected deficit for 2013 and €107.9 billion result from the redemption of the medium- and long-term debt falling due in 2013.

As usual, the details of the funding programme for 2013 will be released in December 2012. The amount of issuances for 2013 may be revised depending in particular on possible debt buy-backs by end-2012.

The budget deficit for 2012 will amount to €83.6 bn, compared to €81.1 bn in the amending budget act (LFR) for 2012 of August 16, 2012. However, this revision of the State budget balance will not affect the level of the total public balance under national accounting rules. As a result, the total financing requirement is revised upwards to €182,8 bn, but cash resources are revised upwards, at €10 bn, compared to € 7.9 bn in the LFR, due mainly to the additional issuance premiums recorded on medium and long term debt since the beginning of the year. The size of the amount of premiums is due to the level of yields of tapped bonds which, since the beginning of the year, have almost always been lower than the coupon yields.

In all, the amount of medium- and long-term issuances net of buybacks for 2012 will remain unchanged at €178bn.

The net change in the BTF outstanding at the year-end 2012 will be reduced by €10 bn compared to € 7.7 bn in the amending budget act of August 16, 2012. This downward revision of the estimated BTF outstanding is due mainly to buy-backs of some securities maturing in 2013 which reduce the requirement on the single Treasury account at the year-end, to the pursuit of the centralization of the cash surpluses of public structures reflected in a stronger than expected increase in deposits from Treasury correspondents and to the increase in net issuance premiums mentioned above 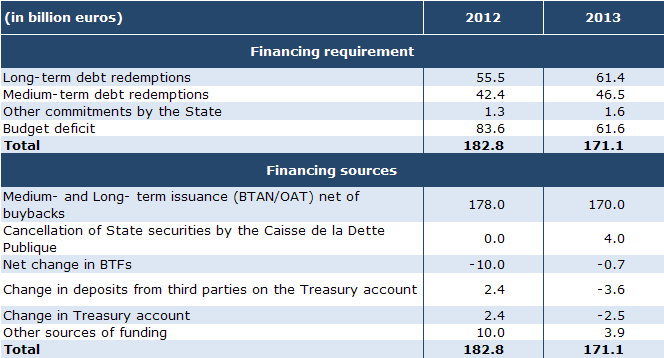