The State financing requirement therefore is down at €180.3bn against €184bn previously.

Other cash resources are revised upwards, at €7.9bn, or a net inflow of cash of +€3.7bn compared to the previous budget law, due mainly to the issuance premiums recorded since the beginning of the year. The size of the amount of premiums is due to the level of yields of tapped bonds which, since the beginning of the year, have been almost always inferior to the coupon yields.

The amount of medium- and long-term issuances net of buybacks (BTANs and OATs) will remain unchanged at €178bn. 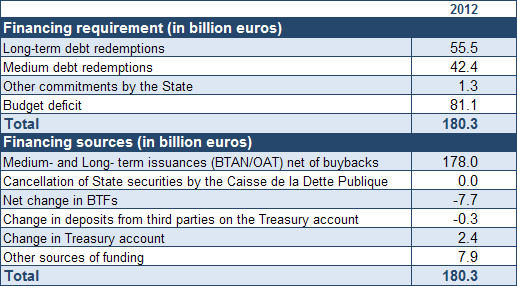