On October 2, 2001, Laurent Fabius, the minister for the Economy, Finance and Industry announced that a swaps programme would be conducted in order to shorten the average maturity of debt from 6 years and four months in the Summer of 2001 to 6 years at the end of 2001 and 5 years and 6 months at the end of 2002.

Despite uneven market conditions, these swap agreements (i.e.85 deals, with an average size of EUR 438m) did not face significant hurdles, thanks to the deep liquidity of the European market and to the quality of execution of counterparts. These 14 partners, all of them SVTs (primary dealers), dealt for widely different amounts. AFT finds it premature, at the current stage of its swaps programme, to disclose precise indications regarding its more frequent counterparts.

Altogether, swap dealings made it possible to cut 54 days from the average maturity of negotiable debt and bring it to 5 years and 358 days as of December 31, 2001 (see chart). 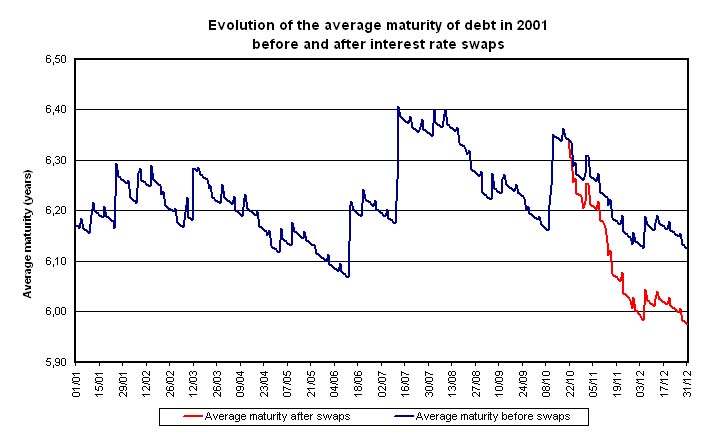